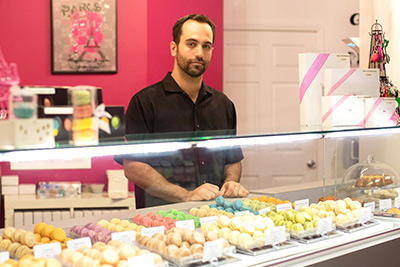 Macarons: A Timeless Favorite of a Bakery Franchise

While the first macaron recipes can be traced back to as early as the 8th century, the sustained success of this little French cookie is due largely to the modern entertainment industry. Accounting for nearly $35 billion annually, the bakery industry has been marked by nearly as many fads as the fashion industry. While the cupcake was once a booming craze, the macaron has come to stay. After the cupcake boom fell off, the macaron made its way onto the scene in the early 2000s and is still rising in popularity.

Something You Don't Want to Miss Out

As the American consumers' concern for health and diet grew, there was a rising demand for healthier options that impacted the entire food industry, particularly baked goods. The overly-indulgent, sugar packed cupcake fad wasn't strong enough to face the demand for healthier options. The bakery industry was left wondering what the next dessert craze would be. The 2006 movie Marie Antoinette brought the answer. Delicate, colorful, dainty, and sweet, macarons were soon to be seen in every cafe or dessert shop around the nation. Other movies and shows that helped strengthen the popularity of the macaron include The Great Gatsby and Gossip Girl.

More than a decade later, macarons have remained the star of the bakery industry. Le Macaron is a bakery franchise specializing in macarons that has helped spread the delicious French delicacy across the nation. With 50 locations opened since its founding in 2009, Le Macaron has quickly become recognized as a quality supplier of macarons. Customers love our delicate desserts that provide sweetness without being overly-indulgent. Franchise Owners love the steady revenue that the macaron craze provides; current AUV for all locations is at $440,857.

Those interested in investing into our French bakery franchise will benefit from the timeless flavor of macarons. From the 8th century to today, macarons are here to stay, even in a macaron kiosk.

HOW MUCH CAN I MAKE?

The bakery cafÃ© segment is growing more than twice as fast as all other food segments and we've also seen strong gains in the gluten-free, preservative free and low-calorie consumption segment which are expected to grow 9.3% over the coming 8 years. When you introduce a Le Macaron French Pastries into your market you'll not only own the most innovative specialty retail concept of its kind, you'll also tap into a high growth market with tremendous revenue potential.

As you go through the education process, you'll have the opportunity to speak with our Development Manager and look through our Franchise Disclosure Document (FDD). As you learn more about the economics, you'll be able to build a business plan and performance forecast.

In the meantime, here's a sneak peek of our unit economics.

*As disclosed in our Item 19 of Le Macaron French Pastries Development, LLC's 2020 Franchise Disclosure Document. This figure reflects the average for the top quartile of 7 locations in the system, including 3 affiliate-owned and 4 franchise-owned locations. The results for new locations may differ from the represented performance. There is no assurance that you will sell as much.

Bring the Famed French Flavor to Your Community

Are you a macaron loving entrepreneur that is passionate about building a successful business? By investing into the Le Macaron bakery franchise, you can build a solid career and bring the delicious flavor of French pastries to your community. We have various territories available across the nation. As we continue answering the demand for the famed macaron nationwide, we are looking to partner with qualified entrepreneurs.

We have three bakery franchise models available: macaron kiosk, single-unit cafe, and multi-unit cafes. The initial investment for each model, which will cover all the basics required to get your business open, ranges in accordance to size and number of units. All Le Macaron Franchise Owners will benefit from our robust support program which covers training, marketing, and other focus areas.